The State Archives of Dubrovnik is a treasury not just for the history of the Jews of Dubrovnik, but for the Jews from Istanbul to Venice as well. Nevertheless, not much has been done concerning the Jews of Dubrovnik, because finding and documenting relevant data requires an enormous amount of time and skills for going through hundreds of volumes in search of Jewish litigants. In 2014 Center JAS initiated a project targeting Criminal Court Registers from the mentioned Archives. The subject of this project, carried out by Vesna Miović and Ivan Čerešnješ, was the research, inventory and cataloguing of three archival series Lamenta Criminalia post terraemotum, Diversi e possesso de criminale (Criminal Court records) and Criminalia (Criminal Court verdicts) involving Jewish litigants (1667-1808), totalling 297 volumes and approximately 180,000 pages. Within that material 816 litigations and 59 verdicts concerning Jews have been found. They provide abundant information on the everyday life of Jewish Community in Dubrovnik as well as its interactions with its gentile environment. Authors consider this research as an opening insight into the everyday life of Jews of Dubrovnik.

The results are now available for download free of charge. We would however appreciate if you could  fill in this questionnaire after reading.

Born 1961 in Dubrovnik, Croatia, graduated from Oriental studies (Turkish, Arab and Persian languages) at the Faculty of Arts in Sarajevo. She obtained her PhD from the University of Zagreb in 1996 with the subject Relations at the Ottoman-Ragusan border (1667–1806). She is working at the Institute for Historical Sciences in Dubrovnik of the Croatian Academy of Sciences and Arts, with her main focus to the Ottoman-Ragusan relations and the history of Ragusan Jews. Her scientific work is based on researching the archives of the State Archives of Dubrovnik.

The most recent book publication of Vesna Miović is a comprehensive monography (560 pages) on Jewish families of Dubrovnik (Ragusa) in the period between 1549 and 1940 (original title in Croatian language: Židovski rodovi u Dubrovniku (1549-1940). It was issued by the Institute for historical sciences in Dubrovnik as a part of special series on residents of Dubrovnik and its surroundings.

A significant part of the research was facilitated and based on the findings of the Research, Inventory and Cataloguing Documents of the Criminal Court Registers in Dubrovnik project. The case study also proves why such cataloguing is of vital importance for research of Jewish civilization. The book is available in (specialized) bookstores and online. 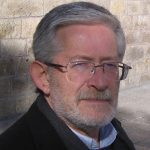 Born 1945 in Sarajevo, Bosnia and Herzegovina, graduated at the Faculty of Architecture and Urban Planning in Sarajevo, working as an architect and civil engineer until emigration to Israel in 1996. He was the president of the Jewish Community of Bosnia and Herzegovina in 1992–1995. He was awarded the Légion d’honneur, French highest order, in 1994 for humanitarian activities during the Bosnian war. Since 1997 he is working at the Centre for Jewish Art of the Hebrew University in Jerusalem, Israel and has obtained his MA in 1997. He is engaged in documentation of the Jewish immovable and movable cultural, historical and religious heritage in Eastern Europe and the countries of the former Yugoslavia.